No matter who wins the NBA All-Star Game, Chicago students will benefit. Here are the two charities handpicked by the captains.

NBA All-Star captain Giannis Antetokounmpo selected After School Matters as the organization his team will play for in the 2020 All-Star Game in Chicago, while… More ›

After School Matters’ Senior Program Director, Tony Diaz, sits down with NBC 5’s Alex Maragos on their “Making a Difference”More › 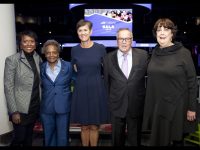 Nearly $3 million raised for After School Matters, which gives Chicago teens ‘the tools they need to survive’

The Wintrust Arena was filled with nearly 800 civic, corporate and community leaders who came out to support the AfterMore ›

Want to submit a Highlight?

College Visits and Cow Farms: Q&A with a Teen

On April 11, After School Matters Urban Agriculture & Entrepreneurship program (a program that teaches teens about the business of urban agriculture and allows them… More ›

Nearly 13,000 Chicago teens participated in After School Matters programs during summer 2017. View the photos below to see how they found their futures. To… More ›

After School Matters is thrilled to announce that 27 of our teens have been selected as Posse Scholars! Posse started in 1989 because of one student who… More ›