Findings from new analysis by the American Institutes for Research and After School Matters illustrate the stressors Chicago teens are facing: elevated food insecurity, increased… More › 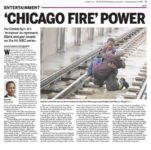 A new mural was dedicated Saturday morning at Uplift Community High School in the city’s Uptown neighborhood. The bricolage mosaic was designed by teens involved… More ›

Former Lakers player Earvin “Magic” Johnson was in Chicago speaking with children in the city’s After School Matters Program. Johnson reminded the teens about the… More ›

These talented and spirited young people are part of the Austin Musical Theater, an after school apprenticeship program sponsored by After School Matters. Read more… More ›

Hundreds of Chicago school kids are showing off their talents on Wednesday evening at the 7th annual After School Matters celebration. Read more here.